The Flat Hone System was designed by Japanese technology. Flat Hone Sharpening is the gentlest sharpening possible for your shears. It provides more accuracy of sharpening angles as well as well as a convex of Japanese Hamaguri Shears. Water is used while sharpening to keep your shears cool during sharpening. This technique is what keeps the temper, or hardness, that Hitachi Japanese Stainless Steel is known for. Hence, if your shear is heated while sharpening by a noncertified sharpener, it loses its hardness. A convex edge is superior to the beveled angle shear. As a certified master sharpener, my flat hone sharpening technique is the best on the market for putting a convex edge, while keeping the correct radius, on your Japanese shear.

Why should you always have sharpening done by a trained certified sharpener?

The radius of a Japanese shear was developed to stop your shear from pushing the hair. Before the Japanese designed shear took over the salon shear market, there was a serrated edge German shear. The serrated edge thumb blade held the hair while the finger blade cut the hair. This is a beveled edge shear and still used for dry cutting. However, 9/10 salon shears are Japanese convex blades and will also dry cut. Sharpening 101: never put a beveled edge on a convex blade. However, I, and many certified sharpeners, have seen this mistake many times over. A convex edge is superior to a beveled edge. It lasts longer and is the proper edge for Japanese shears. The untrained sharpener only knows how to sharpen a beveled edge. This is how a knife (with exception of a sushi knife) or a kitchen shear is sharpened. Why turn your precise salon tool into a paper cutting shear like the one in your kitchen drawer? 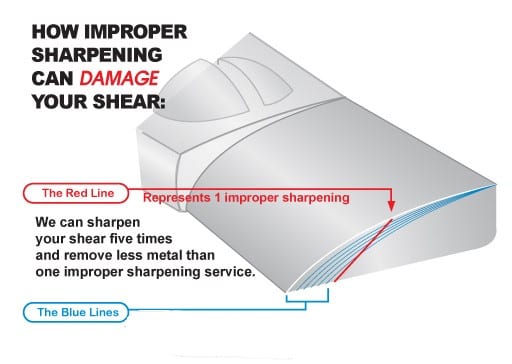 Also, heating the metal will damage the tempering of your shear. A sharpener putting a beveled edge on a Japanese convex edge will be heating your metal causing it to lose its tempering. Without knowing the proper radius when sharpening an untrained sharpener will change that also. A knife has no ride, but a salon shear does. So again, the untrained sharpener will pay no attention to the ride not knowing it even exists. He likely will put an improper angle on your shear as salon shear angles range from 0 degrees (some thinners) to 55 degrees. Part of being certified is to know the specifications of all shears. Different shears have different angles and radius’.

There is much more to a salon shear than just an angle. When introduced, the Japanese convex/radius blades dominated the salon shear industry replacing the serrated edge German design. After the Japanese engineered two radius blades, with convex edges, Stylists could now slide cut when necessary. The German serrated edge did not allow slide cutting. For stylists, the Japanese Hamaguri blades aided them tremendously with efficiency. It also provided a smoother cut, but most important, less wear on physical strains caused to stylists. Therefore, the radius and ride are of high importance in sharpening a Japanese salon shear. Different shears have different radii.

The wrong radius will cause a shear to work improperly. An untrained sharpener will damage the shear with improper sharpening since he has not been trained to the importance of the correct radius of each shear; he is not aware of factory specifications.

However, a trained certified sharpener will sharpen to factory specifications ensuring your radius, angle, convex, set, bow, balance and tension is correct.

Do not fall for cheap imitation sharpeners; A Certified trained sharpener will sharpen to correct angle, convex the blades, maintain the ride, the bow, and set, realign tips, fit (if needed).

The hollow ground should never be touched. However, I have found many times where an untrained sharpener has ground into the hollow ground, causing serious damage to the ride.

A full-service maintenance should be done each time your shears are sharpened.  This is what you paid for when you bought your shears. Would you buy a Ferrari and drop it off at the High School Auto Shop to be worked on? Why do that with your shears?

By Mail orders I am currently also sharpening for Kamisori Shears, but sending to KB shears direct will be quicker and less costly.

Scroll to the bottom of the page to find KB West Coast Shears and my store address. If you mail directly to me, the cost is reduced and the return is quicker, as I do not need to refer to them for each order.

We're currently offline. Send us an email and we'll get back to you, asap.

Buy it NICE or buy it TWICE! Shop Now

Type and press Enter to search